Today, we are going to build a circular progress bar using the Animated library of react native with the help of three semicircles. Let's understand the concept first then we will dive into coding.

We have a base outer circle that serves as a container for the other three semicircles. We will rotate these semicircles with transform property to achieve the desired result. 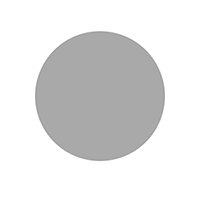 How do three circles work?

Their work depends on the value of progress. It can either be less than or greater than 50. Let's see the two possible cases:

The first circle (purple) is initialized with a rotation of 180 degrees and completely covers the right portion of the outer base circle (grey). 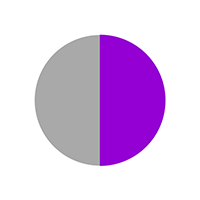 The second circle is rendered on top of the first circle (purple) with the same rotation and backgroundColor equal to the outer base circle (grey). It makes the first circle disappear as grey color completely overshadows the inner purple circle. I have reduced the opacity of the upper (grey) circle to show what's happening.

When the user clicks to animate, we are rotating the upper (grey) circle which is slowly revealing the inner (purple) circle from behind.

Note: Inner circle (purple) is not moving at all. We are rotating the upper circle (semi-transparent here) to show the inner circle from behind.

The third semicircle is initialed with 0-degree rotation thus covers the left half of the base outer circle. Its background color is grey (same as the base circle).
Remember, the second circle (grey on right) is moving clockwise and taking some of the left halves of the outer circle. It looks something like this: 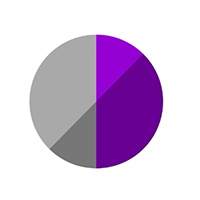 Hence, the third (left grey) circle has a higher elevation which enables it to overlap the extra portion of the second circle on the left side.

Initially, all three semicircles are initialed with 0-degree rotation and cover the left half of the outer base circle (grey). The first circle is at the bottom then second on top it and third on top of second as it has the highest elevation. This leaves the right half of the base circle empty.

Both first and second circles (both purple at left) will slowly rotate to cover the right half from 0 to 180 degrees together. This covers the animation to 50%.

The first circle's job is to take up to 50% of progress and then the second circle will rotate some more to cover the remaining percentage. I have made the second circle semi-transparent to show you how it's working. (the third circle is removed for simplicity). This is typically the case for percent={70}:

We will rotate the third and second circle for the same degrees clockwise (extra 20% in the current example). It will leave space so that the second circle becomes visible. To show clearly, the third circle is yellow right now, and first & second are removed.

Do you see the problem here? As our third circle rotates clockwise, it takes some portion of the right half and overlays the first circle (third has a higher elevation, remember?).
The solution is simple and you might have guessed it already. Toggle the elevation value so the third circle goes inside the first circle.
First Circle is semi-transparent right now so you can see how the third (yellow) circle is going behind the first one (semitransparent). After toggling elevation:

I hope it is clear what's happening. Let's correct the colors and see our final animation!

Looks good, isn't it? Let's add a smaller inner circle so our view can start looking more like a progress bar.

A smaller inner circle goes on top of everything creating an appearance of a progress bar.

There are 5 steps involved:

Render the base container circle with a grey color background. It is going to contain the other three semicircles.

Initialize default values for all the three semicircles.

We are going to render three semicircles, so let's write a helper function to make our job easier.

It takes a color prop and a transform prop to rotate the semicircles clockwise. Let's not worry about the logic right now and call this function to render our first semicircle.

Note: firstCircleColor is activeColor (purple) in both cases.

It's receiving rotate1 value which is interpolation of animated value we initialised in previous step. It simply maps 1 integer value to 1 degree:

Its rotation value can be interpolated with secondCircleAnimatedValue we initialized earlier.

Our third color is grey (passiveColor) in both the cases and receives a rotation value. Also, in second case (>50), we are toggling elavation value as described earlier. renderHalf for this use case can be:

rotate3 and elevation3 values can be interpolated as:

Elevation toggle logic: the third circle is only rotating in the second case from left half to right half. As soon as it starts moving, it takes up some portion of the right half and that's exactly when we want to toggle elevation.

Now we will write animation function for both cases. We want to start animating whenever we receive a new percent value. We can use a simple useEffect hook for this purpose:

Above function simply chooses the animation to execute based on value of percent. Let's write our animation function for first-case (<50):

percent * 3.6 is just to convert percentage to degrees. This function will animate second circle (grey) in clockwise direction to reveal first circle (purple) from behind. Now, let's see animation for our second-case (>50):

That's it, we are done with our animation. Let's add one inner circle to make this look like a progress bar.

And we are done! Click here to view source code used in this tutorial.
I hope you had fun learning animation with react native. Happy coding!

This component was created by Ankeet Maini. For full repo with TypeScript, head over to github.com/ankeetmaini/rn-animation-circula...

Did you find this article valuable?

Support Mohd Shad Mirza by becoming a sponsor. Any amount is appreciated!